Official Michael Jackson ‘This Is It’ Music Video Surfaces

Official Michael Jackson ‘This Is It’ Music Video Surfaces

Nearly two months after Michael Jackson and company Sony released a tribute song to remember the life of the King of Pop entitled ‘This Is It,’ which also shared the same name as the tour Michael was to embark on at the O2 arena in London, the official music video for the song has appeared.
The video captures some of Micheal’s most defining moments, poses, pictures, tributes and a host of other stills and slowed down footage from certain times in his career. It is a definite improvement on the version they released which just showed clips from the film, but the thing is, it is just too late.

Who wants to see this music video now? Two months later? The film was an apparent success, but the song did not seem to do aswell, and also shared its fair share of Michael Jackson controversy when it became apparent that the song was not just a Michael Jackson song from the vaults, but a collaboration with Paul Anka, who later sued Sony to make sure his name was on the credits.

Watch the new video below. 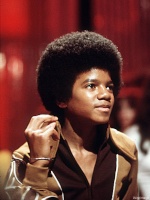 Re: Official Michael Jackson ‘This Is It’ Music Video Surfaces

i really miss mikey very much ,tears coming out when im watching!
rest in peace your highness!we love u! thanks for sharing such a touching video!